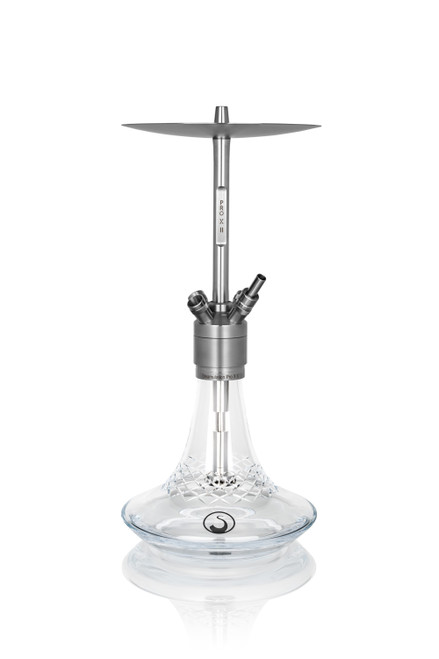 The unique Steamulation Purge-Pro valves allow every user to easily blow out the bowl without having to remove the valve balls. The valves of all four smoke ports work automatically in both directions (smoke & blow out). Compared to the first Pro X generation, the smoke is effectively expelled via the four nozzles in the top of the base and vented towards the plate. (Other blow-off variants are optionally available).

The intelligent system can even compensate for overpressure in the shisha and, if necessary use the free hose connections for blowing off.

Through the use of precision balls made of high-performance ceramics, the hookah is perfectly tight when smoked and does not draw in any foreign air. Ceramic is also extremely corrosion-resistant and extremely wear-resistant.

The Steamulation Pro X Series allows its users to individually adjust the flow at each hose connection using the Steamulation Airflow Control between traditional and modern as desired.

The hose connections, made of V2A stainless steel, can be rotated continuously, and allow precise adjustment of the airflow. Due to the complete integration, no further adapters are needed, and the system can be adjusted to the preferences of each user while smoking. In contrast to the previous Pro X generation, the system has been optimized again.

It can now be adjusted even more precisely. At the same time, the overpressure function of the Pro X II can now be regulated.

With the new Dip Tube Control, you can determine the length of the dip tube yourself. You have an 9-step adjustment option at your disposal. By shortening or lengthening the tube, you can further adjust the draw and draw of your Pro X to suit you. This allows you to individualize the smoking behavior like in no other hookah.

Compared to the previous version, the adjustment has been optimized again. The system has gained additional stiffness and stability. The engagement of the different levels is much “richer” for the user.

The Steamulation Pro X II will get several new accessories in the future that have been specially developed.